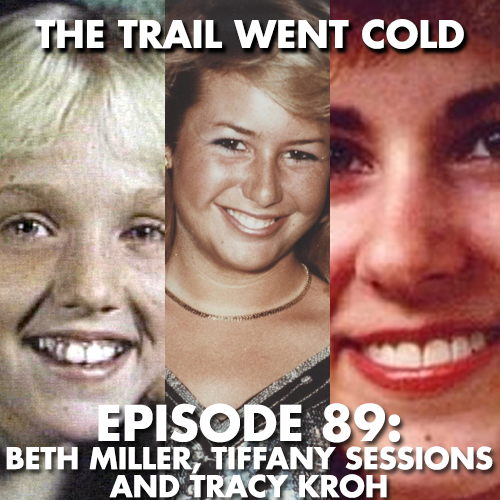 August 16, 1983. Idaho Springs, Colorado. 14-year old Beth Miller leaves her home to go jogging, but never returns. The investigation uncovers some promising leads, including eyewitness accounts of a man in a red pick-up truck who was seen flirting with Beth in the days prior to her disappearance. Ten years later, the former girlfriend of a deceased suspect leads the authorities towards an alleged burial location for Beth’s body, but nothing is found.

February 9, 1989. Gainesville, Florida. 20-year old university student Tiffany Sessions leaves her condo to go for a power walk, but does not return. 24 years later, after a convicted murderer named Paul Rowles dies in prison, investigators uncover evidence in his possessions which seems to implicate him in Tiffany’s disappearance, but her remains cannot be found.

August 5, 1989. Dauphin County, Pennsylvania. 17-year old Tracy Kroh leaves her house to visit her sister, who turns out not to be home. When Tracy does not return, her abandoned car is eventually discovered in a nearby town square, but Tracy is nowhere to be found. Four years later, some of Tracy’s possessions are found next to a remote creek, but she continues to remain a missing person.

While these three cases do not seem to have any connection to each other, they would unexpectedly be linked together in 1994 after the National Center for Missing and Exploited Children received a bizarre anonymous tip which alleged that all three victims were still alive. For the first time, “The Trail Went Cold” is going to tackle three unsolved missing persons cases in the same episode and explore the likelihood of them being connected.