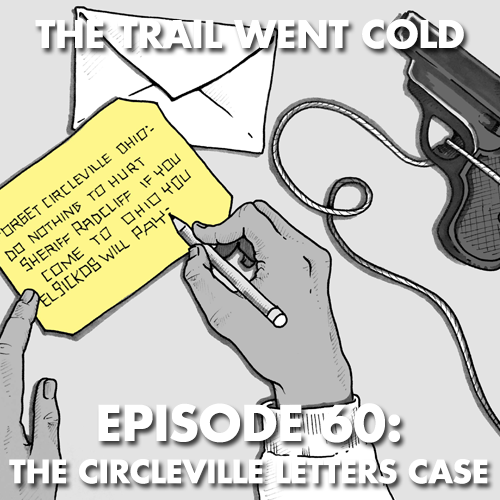 August 19, 1977. Circleville, Ohio. After receiving a phone call, an angry Ron Gillispie frantically drives away from his home and dies after crashing into a tree. For the past several months, Ron’s wife, Mary Gillispie, had been receiving anonymous threatening letters expressing anger about her alleged affair with another man. In total, over a thousand anonymous letters would be sent to residents of the area during this time period. Five-and-a-half years later, Mary would find a homemade booby trap containing a gun belonging to Ron’s former brother-in-law, Paul Freshour. Paul is accused of being the author of the anonymous letters and spends ten years in prison for Mary’s attempted murder, but the threatening letters continue to be sent while Paul is incarcerated. Was Paul Freshour the mysterious “Circleville Writer” or was he framed and wrongly imprisoned? For our special two-year anniversary show of “The Trail Went Cold”, we will be chronicling a case which was voted on by our listeners: the bizarre saga of “The Circleville Letters”. Special thanks to listener Jamie Sciullo for narrating the opening of this episode, and Tyler from “The Minds of Madness” podcast for providing the voice of the Circleville Writer.

Also, a big thanks to Esther Gamez for providing us with another terrific piece of cover art for this episode. Be sure to check out Esther’s Facebook and Tumblr pages to see more of her artwork.

We would like to thank our sponsor, Winc, for supporting this week’s episode. To receive a $20 credit and free shipping on 4 bottles of wine on your first order, go to trywinc.com/cold.