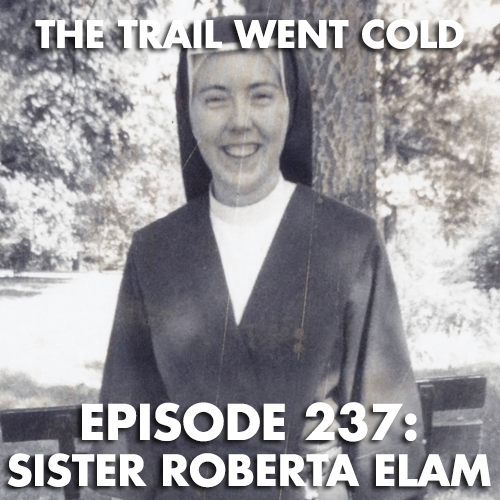 June 13, 1977. Ohio County, West Virginia. Roberta Elam, a 26-year old postulant known as “Sister Robin” who is planning to become a nun, is seen living the motherhouse of the Mount St. Joseph convent. Hours later, Sister Robin’s body is found on top of a nearby hill in a secluded mediation area and she has been raped and strangled to death. There is immediate speculation that the crime might be connected to the murders of four other young women, which took place in neighbouring Washington County during the preceding months. However, in recent years, investigators have started looking at a potential suspect who supposedly confessed to Sister Robin’s murder. On this week’s episode of “The Trail Went Cold”, we cover the unsolved death of Sister Roberta Elam and explore its potential connection to a number of other homicides which took place during that time period.

“The Trail Went Cold” is going to be appearing on podcast row at “Crimecon UK” at the Leonardo Royal Hotel &  Spa in London on September 25-26, 2021. To get a 10 % discount on the purchase of tickets to the event, please use our specialized promo  code, “COLD21”, by visiting https://www.crimecon.co.uk.