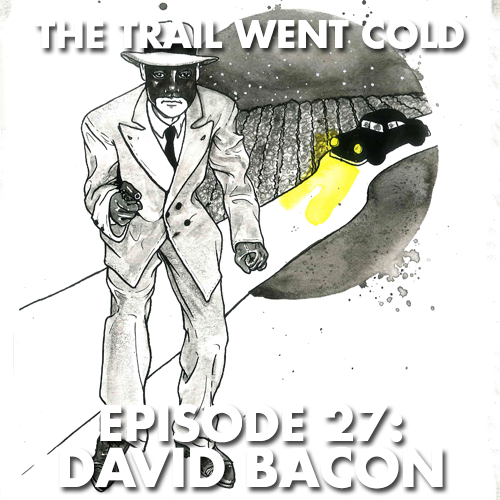 September 12, 1943. Los Angeles, California. David Bacon, a 29-year old actor who has just played the title character in the serial drama “The Masked Marvel”, tells his wife he is planning to go swimming and leaves their home. Later that afternoon, Bacon’s car is seen driving erratically before it jumps a curb and crashes into a bean field. After Bacon stumbles out of the car and dies, a fatal knife wound is discovered in his back. The investigation would uncover numerous clues to suggest Bacon was leading a secret double life, such as a coded diary, a rented apartment and unexplained trips to Venice Beach. However, there would be no answers about who actually murdered him. For our special one-year anniversary show of “The Trail Went Cold”, we shall be examining one of Hollywood`s most baffling unsolved mysteries.

A special thanks to one of our listeners, Esther Gamez, for providing the cover art for this episode. Be sure to check out Esther’s Facebook and Tumblr pages to see more of her artwork.