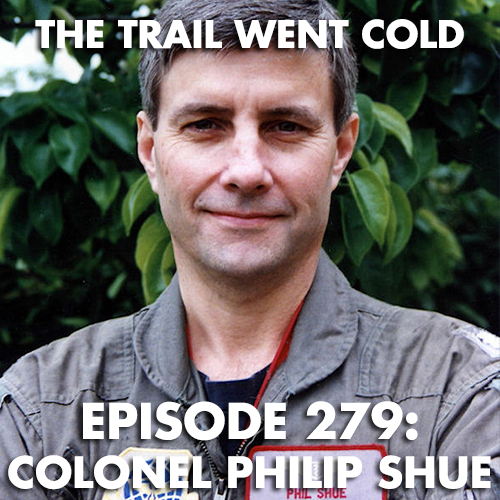 April 16, 2003. Kendall County, Texas. 54-year old Colonel Philip Shue, who works as a staff psychiatrist for the United States Air Force, leaves his residence to drive to work. Two-and-a-half hours later, Colonel Shue’s car is seen driving erratically down the interstate before it crashes into some trees and Shue is found dead in the driver’s seat. Even though his death is ruled to be a staged suicide, there are a number of suspicious discrepancies, as duct tape is wrapped around Shue’s wrists and feet, a large gash is carved into his chest, and both of his nipples have been removed. There is suspicion that Shue’s ex-wife had him tortured and killed in order to cash in on some life insurance policies, but even though a judge later makes a public ruling at a civil trial that Shue was the victim of a homicide, his official cause of death is never changed. Did Colonel Shue intentionally crash his car and take his own life, or did was killed while attempting to escape from someone who did him harm? We’re going to explore both sides of this perplexing case on this week’s episode of “The Trail Went Cold”, which chronicles one of the most bizarre unexplained deaths you’ll ever hear about.

“The Trail Went Cold” is going to be appearing on podcast row at “Crimecon UK” at the Leonardo Royal Hotel &  Spa in London on June 11-12, 2022. To get a 10 % discount on the purchase of tickets to the event, please use our specialized promo  code, “COLD22”, by visiting https://www.crimecon.co.uk.

“The Trail Went Cold” will be appearing at the True Crime Podcast Festival, taking place at the Westin Park Central Hotel in Dallas, Texas on August 27-28, 2022. To purchase tickets, please visit https://truecrimepodcastfestival.com/