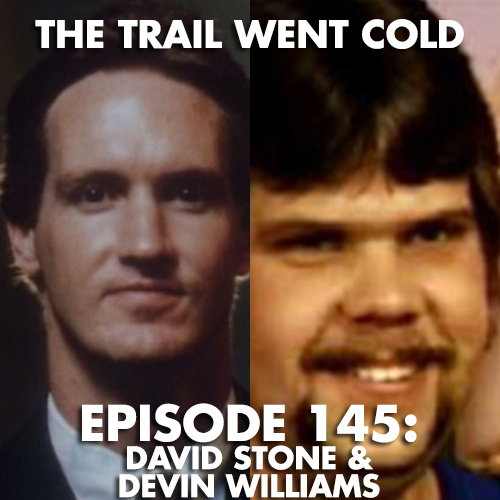 October 31, 1988. Hidalgo County, New Mexico. 29-year old David Stone, a stock market analyst from California, is seen wandering through the desert and exhibiting strange behaviour. Two days later, David’s abandoned car is discovered next to the highway, but David himself is nowhere to be found. Search efforts uncover a number of cryptic clues David left behind to suggest he was on some sort of spiritual journey related to the New Age movement. Over three years later, David’s remains are discovered in the desert, but the exact circumstances of his death remain unknown.

May 28, 1995. Coconino County, Arizona. 28-year old Devin Williams, a long-haul truck driver from Kansas, recklessly drives semi-trailer truck into Tonto National Forest before it becomes stuck in some mud. After Devin exits the truck, witnesses see him displaying bizarre behaviour before he takes off into the woods and disappears. Devin had been in the midst of transporting a shipment from California to Kansas until he drove over 60 miles off-course for unknown reasons. Two years later, Devin’s skull is discovered near the bottom of a cliff, but no one can figure out his cause of death or why he wound up in the forest to begin with.

In this month’s first Halloween-themed episode of “The Trail Went Cold”, we explore two odd cases in which a victim went missing after acting strangely before they were subsequently found dead.

This episode of “The Trail Went Cold” is sponsored by the app game Best Fiends. Download it for free on the Apple App Store and the Google Play store.