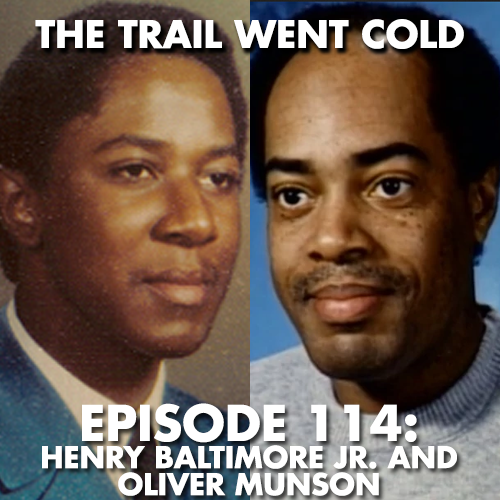 May 30, 1973. East Lansing, Michigan. The sister of 21-year old university student Henry Baltimore Jr. goes to meet him at his apartment, but discovers he is not there and eventually reports him missing. Nearly three months earlier, a pair of attackers had broken into Henry’s apartment to assault and rob him and police arrested a suspect named Roy Davis. After Henry testified against Davis at his preliminary hearing, Davis allegedly threatened him and Henry would go missing two days before Davis’ arraignment.

February 13, 1984. Catonsville, Maryland. 39-year old teacher Oliver Munson leaves his home to drive to school, but never arrives. Oliver’s abandoned car is soon discovered a few blocks away and two weeks later, a stolen vehicle is found containing evidence which suggests that Oliver was murdered. One year earlier, Oliver had unknowingly purchased a stolen car from a career criminal named Dennis Watson. After Watson was arrested, Oliver was called upon to testify as a witness against him and his disappearance took place only three days before Watson’s trial.

This week, we will be presenting a special double feature episode of “The Trail Went Cold” about two unsolved missing persons cases where the victim vanished shortly before they were scheduled to testify in a criminal case. Special thanks to listener Ryan Eichenfeldt for providing the opening narration on today’s episode.

This episode of “The Trail Went Cold” is brought to you by “Murder Book”, a new true crime podcast hosted by bestselling author Michael Connelly, available on Apple Podcasts or wherever you listen.

“The Trail Went Cold” will be appearing on podcast row at CrimeCon 2019 from June 7th-9th at the Hilton Riverside hotel in New Orleans. Listeners can receive a 10% discount on the purchase of a standard badge by using the promo code “COLD19”.

“The Trail Went Cold” will also be appearing at True Crime Podcast Festival 2019 on July 13th at the Marriott Downtown in Chicago. Please visit their website for more details.